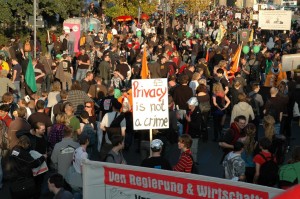 On October 11, In 22 cities across Europe, citizens demonstrated to express their concerns over what they see as the increasing growth in government-created surveillance societies. October 11 was Freedom Not Fear Day, organized by the German Working Group on Data Retention.

In Berlin alone, over 15,000 protesters gathered in a rally that ended at the Brandenburg Gate. (The organizers have argued that 15,000 is a lowball number from the authorities, and the actual number could be closer to 50,000.) Peaceful and creative action took place throughout Europe, including art performances in Vienna, public lectures in Rome, and the construction of a collage made from uploaded photos of UK surveillance equipment and tactics in London.

From the website of the German Working Group on Data Protection:

“Surveillance mania is spreading. Governments and businesses register, monitor and control our behaviour ever more thoroughly. No matter what we do, who we phone and talk to, where we go, whom we are friends with, what our interests are, which groups we participate in – “big brother” government and “little brothers” in business know it more and more thoroughly. The resulting lack of privacy and confidentiality is putting at risk the freedom of confession, the freedom of speech as well as the work of doctors, helplines, lawyers and journalists.

The manifold agenda of security sector reform encompasses the convergence of police, intelligence agencies and the military, threatening to melt down the division and balance of powers. Using methods of mass surveillance, the borderless cooperation of the military, intelligence services and police authorities is leading towards the construction of “Fortresses” in Europe and on other continents, directed against refugees and different-looking people but also affecting, for example, political activists, the poor and under-priviledged, and sports fans.

Surveillance, distrust and fear are gradually transforming our society into one of uncritical consumers who have “nothing to hide” and – in a vain attempt to achieve total security – are prepared to give up their freedoms. We do not want to live in such a society!

We believe the respect for our privacy to be an important part of our human dignity. A free and open society cannot exist without unconditionally private spaces and communications.”

In the United States, Freedom Not Fear Day was supported by a number of NGOs, including the Electronic Frontier Foundation (EFF) and the Electronic Privacy Information Center (EPIC). Together, they issued a release calling for an end to watch lists and data profiling programs that fail to comply with the federal Privacy Act, the establishment of comprehensive data protection legislation, and the repeal of the Patriot Act.

But Freedom Not Fear Day was a decidedly more subdued affair in the U.S. Besides this endorsement and statement issued by EPIC, EFF and IP Justice, no other activities appear to have been scheduled to commemorate Freedom Not Fear Day in Washington D.C. Canadian activities were similarly subdued: the official website notes that a light projection was planned for Toronto’s City Hall but information on who organized it and how it turned out couldn’t be found.

Granted, the roots of Freedom Not Fear Day are in Berlin and the global day of action seems to have spread to other European capitals but it’s interesting to note that North Americans seem reluctant to stand up to the notion of “security theatre“.