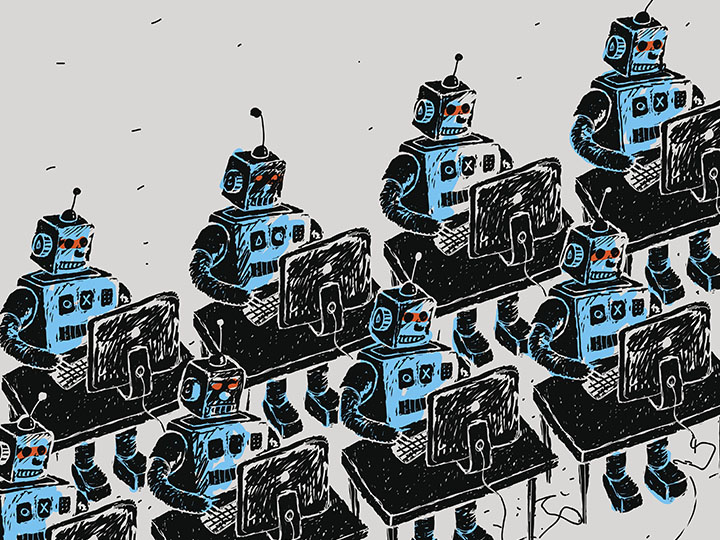 “We propose that a 2 month, 10 man study of artificial intelligence be carried out during the summer of 1956 at Dartmouth College in Hanover, New Hampshire. The study is to proceed on the basis of the conjecture that every aspect of learning or any other feature of intelligence can in principle be so precisely described that a machine can be made to simulate it.” (John McCarthy et al.)Footnote 1

Humans have long been captivated by the idea of machines that mimic natural life. Examples of automata – mechanical devices that move as if by their own power – date back centuries, through the middle ages and into Ancient Greece. Of course, any semblance of “intelligence” in these machines was an illusion; they were designed by their creators to do specific tasks and move in particular ways, though at times these could be quite elaborate.

Early computers shared similar qualities – after receiving an input from a human operator they acted on it in a specifically defined way. However, computing researchers were always intrigued by the possibility of systems that simulate “intelligence” – the ability to use data and/or experience to make decisions and solve problems.

Following a decades-long history of advances and setbacks in the field, a combination of new approaches and improved technology has led to an explosion in the power and adoption of artificial intelligence (AI) within the past 5 to 10 years.

With Canada aiming to become a global leader in AI developmentFootnote 2, and AI-based technologies having ever greater impacts on individual Canadians (and their privacy), the time is ripe to pull back the curtain on this technology. To that end, the OPC presents this, the first in a series of Tech-Know blogs on artificial intelligence.

In this blog series, we will introduce key concepts in AI, with the aim of creating a resource that is accessible to all Canadians.

In this first entry, we will give a broad overview of the field; later posts will explore individual topics in greater depth.

Before we get into how AI works, we need some clarity around our terms.  First, what is intelligence? For our purposes, we can simply use the Merriam-Webster definition:

“Intelligence: the ability to learn, or understand, or deal with new or trying situations; the ability to apply knowledge to manipulate one’s environment or to think abstractly.”

The most important idea here is that an intelligent system is able to change its behavior, or adapt, based on information and/or experience.

We should also clarify what we mean by “artificial intelligence.” Much of what is seen in science fiction movies and other media is artificial general intelligence – computers that, like a human, can apply their intelligence to any problem or situation they may face (or artificial super-intelligence, which can outperform humans in this area). These are areas of active research, but are likely still years from being developed.

On the other hand, artificial narrow intelligence – computers that can apply intelligence to a single task or area – is already widely in use, in areas such as autonomous driving, facial recognition, and fraud detection, amongst many others. While this is a more limited form of artificial intelligence, it can have – and in general is having – a profound influence on Canadians today. As such, we will be primarily focused on this latter concept.

The benefit of AI

The next question we must address is: what makes AI so important? In short, the primary change created by AI is that programmers no longer need to understand precisely how a system should accomplish a task.

It would be almost impossible, for instance, to specify to a computer how to recognize an image or understand a language – but with artificial intelligence, you don’t need to. Instead, you can give a computer a strategy for learning how to accomplish those tasks on its own based on data and/or experience – inspired by the same kinds of methods humans use to learn.

The intuition behind AI (and its associated challenges)

Because they are inspired by the way people learn to solve problems or perform various tasks, the approaches taken to creating artificial intelligence are somewhat intuitive (though, of course, supported by complex math and computer programming behind the scenes).

Consider, for example, the ability to recognize whether or not an animal is a cat. This is something you are probably fairly good at – but how did you learn to do it?

In AI, that is called supervised learning – telling the system what features to look at, letting it examine training examples which are labelled (“cat”, “not a cat”), and letting it determine for itself how to weigh each of those features against each other when making these decisions in the future.

On the other hand, you may have learned from experience – seeing an animal, saying “kitty!”, and adjusting your next observation based on whether someone tells you “yes, that is a cat” or “no, it is not.”

That, in a nutshell, is the approach to AI called deep learning. Rather than attempting to describe all the various features of a complex piece of data, a programmer can simply provide a large set of labelled data (e.g., images with a label saying “cat” or “not cat”) to the AI system and allow it to determine on its own both what constitutes a feature, and what features make a cat a cat.

The above aren’t the only approaches to AI, or even the only intuitive ones. Want a system that finds the best way to solve a problem by trying different approaches, and seeing what works? That’s reinforcement learning. A system that creates a bunch of slightly different copies of itself, then has the ones best suited to its task combine and “reproduce”? That’s an evolutionary algorithm. We could go on.

Of course, even from these simple examples, you might begin to see where things can go wrong. If you don’t know what features the system is looking at (let alone how important it considers each of them), would you trust the system knowing that it is right 99% of the time? Or would you want it to be able to describe, in some way, how it arrived at its conclusion? This is the concept of explainability, which we will examine further in a future blog post.

Similarly, you might ask questions about the training examples. Were some types of cats missing from the data set? Were certain types of cats regularly mislabelled? These (and many other factors) can lead to bias, a concept which, again, we will examine in the future.

It’s important to note that, in calling these concepts intuitive, we absolutely do not mean to minimize the incredible, and incredibly difficult, work being done by AI researchers. Rather, we want to suggest that even if you don’t know how AI researchers are achieving their end result, you can understand what they are attempting to achieve – and this is an important step towards having real discussions about the topic.

Hat tip to Ryan Calo for this reference.