Report on the Directive on Privacy Impact Assessment (PIA)

Section 72 of the Act requires that the head of every federal government institution submit an annual report to Parliament on the administration of the Actwithin their institutions during the fiscal year.

The OPC is pleased to submit its tenth Annual Report which describes how we fulfilled our responsibilities under the Privacy Act in 2016-2017.

The mandate of the OPC is to oversee compliance with both the Privacy Act (PA), which covers the personal information handling practices of federal government departments and agencies, and the Personal Information Protection and Electronic Documents Act (PIPEDA), Canada’s private sector privacy law.

The Privacy Commissioner is an Officer of Parliament who reports directly to the House of Commons and the Senate. The Commissioner may be assisted by an Assistant Commissioner, who has delegated responsibilities under both the PA and PIPEDA. At the time of writing this report, the position has been vacant since December 2013.

The Executive Secretariat ensures effective liaison and coordination with internal and external stakeholders and provides strategic advice so that the Commissioner and Assistant Commissioner are able to carry out their mandate to protect and promote privacy rights of individuals.

The PA Investigations Branch receives and investigates complaints from individuals who claim a breach of the PA, or complaints that are initiated by the Commissioner. The Branch also receives notifications of breaches from federal government organizations, and receives and reviews public interest disclosures made by them.

The PIPEDA Investigations Branch is divided between Ottawa and Toronto. In Ottawa, the Branch receives and investigates complaints of national scope by individuals or initiated by the Commissioner, from anywhere in Canada. In Toronto, the Branch investigates complaints particularly from the Greater Toronto Area (GTA) and coordinates public education and stakeholder outreach activities in the GTA.

The Communications Branch focuses on providing strategic advice and support for communications and public education activities for the OPC. In addition, the Branch plans and implements a variety of public education and communications activities through media monitoring and analysis, public opinion polling, media relations, publications, special events, outreach activities and the OPC website. The Branch is also responsible for the OPC’s Information Centre, which responds to requests for information from the public and organizations regarding privacy rights and responsibilities.

The Legal Services, Policy, Research and Technology Analysis Branch (LSPRTA) provides strategic legal and policy advice and conducts research on emerging privacy issues in Canada and internationally. More specifically, the Branch provides strategic legal advice to the Commissioners and various Branch Heads on the interpretation and application of the PA and PIPEDA in investigations and audits, as well as general legal counsel on a broad range of corporate and communication matters. LSPRTA represents the OPC in litigation matters before the courts and in negotiations with other parties both nationally and internationally. It reviews and analyzes legislative bills, government programs, public and private sector initiatives and provides strategic advice to the Commissioners on appropriate policy positions to protect and advance privacy rights in Canada. The Branch prepares for, represents and supports the Office in appearances before Parliament and in its relations with parliamentarians. Its analysts conduct applied research on the privacy implications of emerging societal and technological issues to support and inform the development of OPC policy guidance and best practices for relevant stakeholders. The Branch administers the OPC Research Contributions Program, which was launched in 2004, to advance knowledge and understanding of privacy issues and to promote enhanced protection of personal information. LSPRTA also identifies and analyzes technological trends and developments in electronic platforms and digital media; conducts research to assess the impact of technology on the protection of personal information in the digital world and provides strategic analysis and guidance on complex, varied and sensitive technological issues involving breaches in the security of government and commercial systems that store personal information. 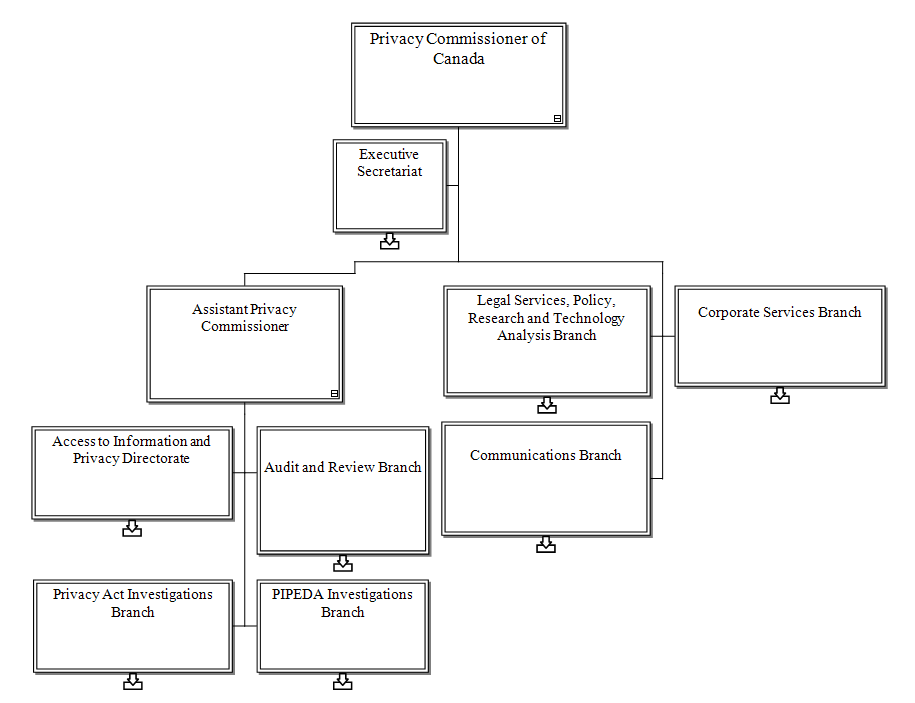 The ATIP Directorate is headed by a Director who is supported by two senior analysts.

In the reporting fiscal year, seven ATIP training sessions were offered to 32 OPC employees, including new employees and those returning from extended leave or temporary assignments elsewhere. The ATIP Directorate also provides trainings sessions as needed.

In addition, the ATIP Director serves as chair of the Privacy Accountability Working Group. This group comprises representatives from every OPC branch. Its purpose and key activities are to:

In the reporting fiscal year, there were a number of staff changes within the ATIP Directorate, including the hiring of a full time senior ATIP analyst, a casual employee and an employee on assignment to assist with the processing of access requests. It is anticipated that in the next reporting year, additional staff changes will take place, including the hiring of a full time employee.

The OPC received 50 formal requests under the PA for the fiscal year and closed 47, which included three that were carried over to the next reporting year. However, in almost half of the requests closed—27 (57%) of them—no records were found (10 requests) or were abandoned (10 requests) or were transferred (seven requests). With the consent of the requestors, six of the seven requests were re directed for processing to the relevant institutions, namely, the Canada Border Services Agency, the Correctional Service of Canada and the Royal Canadian Mounted Police. The last one was re-directed internally. 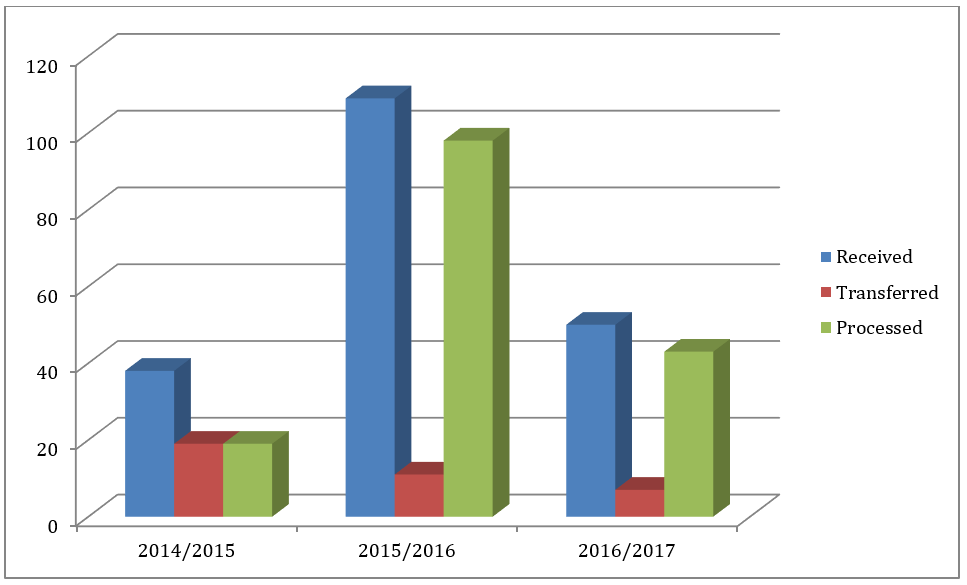 During the reporting period, the OPC processed 43 PA requests for personal information under its control. This accounted for 12,229 pages of information processed. While this represents significantly fewer requests than the previous reporting year, this decrease is explained by the fact that 62 of the 89 requests received in the previous fiscal year, or almost 70% of them, were from the same requestor.

In three cases, the OPC was required to claim extensions of time limits. In the three cases, the volume of records that required processing was quite large, and finalizing those requests within the original 30-day timeframe would have unreasonably interfered with the operations of the OPC. With respect to the 43 requests processed in 2016–2017:

Of the 43 requests processed in the reporting year, 22 were for the contents of PA or PIPEDA investigation files. Section 22.1 of the PA prohibits the OPC from releasing information it obtained during the course of its investigations or audits even after the matter and all related proceedings have been concluded. However, the OPC cannot refuse to disclose information it created during the course of an investigation or audit, once they and any related proceedings are completed — and subject to any applicable exemptions. This exemption was applied in 11 cases during the reporting period. With respect to other exemptions, section 26 was claimed in eight cases and section 27 in one case.

Finally, the OPC received and responded to two consultations from other institutions: the Royal Canadian Mounted Police and the Treasury Board Secretariat.

No PIAs were finalized in this reporting year.

In light of the staff changes within the ATIP Directorate, no privacy policy instrument work was completed during the fiscal reporting year.

The ATIP Director is a member of the OPC’s Policy Development Committee. In that role, policies, directives and guidelines have been and continue to be reviewed to ensure that the PA is respected.

For additional information on the OPC’s activities, please visit www.priv.gc.ca

The Interim Privacy Commissioner of Canada, as the head of the government institution, hereby designates pursuant to section 73 of the Privacy Act, the person holding the position set out below, or the person occupying on an acting basis that position, to exercise the powers, duties or functions of the Privacy Commissioner as specified below and as more fully described in Annex A:

Report on the Directive on Privacy Impact Assessment (PIA)