Section 72 of the Act requires that the head of every federal government institution submit an annual report to Parliament on the administration of the Act within their institutions during the fiscal year.

The OPC is pleased to submit its eleventh Annual Report which describes how we fulfilled our responsibilities under the Privacy Act in 2017-2018.

The mandate of the OPC is to oversee compliance with both the PA, which covers the personal information handling practices of federal government departments and agencies, and the Personal Information Protection and Electronic Documents Act (PIPEDA), Canada’s private sector privacy law.

The Privacy Commissioner is an Officer of Parliament who reports directly to the House of Commons and the Senate. The Commissioner may be assisted by Assistant Commissioners, who have delegated responsibilities under both the PA and PIPEDA.

In 2018, the OPC, following an organizational review, adopted a new structure to support the Privacy Commissioner’s vision to be more proactive, and to focus efforts where there can be an impact for the greatest number of Canadians.

The core responsibility of the OPC is the protection of privacy rights of Canadians. To do this, the OPC’s work will now fall into two program areas — Compliance and Promotion. Both areas are important in protecting privacy.

The Compliance Program, headed by the Deputy Commissioner, Compliance, focuses on addressing existing privacy compliance problems through a variety of enforcement activities to ensure violations of the law are identified and that remedies are recommended. This includes investigations into complaints filed by Canadians, but also a shift towards more proactive enforcement, such as proactive, Commissioner-initiated investigations or, in certain cases, audits, to review issues that aren’t being addressed through the complaint system.

The PA Compliance Directorate investigates complaints under the Privacy Act from individuals who believe they have not been given access to their personal information held by government institutions, or feel that their information has been inappropriately, collected, used, disclosed or managed. The Directorate also investigates complaints and conducts audits that are initiated by the Commissioner, and receives notifications of breaches from federal government organizations.

The PIPEDA Compliance Directorate investigates complaints under the PIPEDA from individuals about the collection, use and disclosure of their personal information in the course of commercial activities. The Directorate also investigates complaints and conducts audits that are initiated by the Commissioner, including sector-wide investigations, and receives notifications of breaches from private sector organizations.

The Promotion Program, headed by the Deputy Commissioner, Policy and Promotion, Policy and Promotion, is forward-looking and aims to inform Canadians of their rights and how to exercise them, and to bring organizations into compliance with the law. This involves, for example, the development and promotion of general—yet practical—information and guidance, reviewing and commenting on Privacy Impact Assessments (PIAs), and offering industry advice on specific initiatives. The goal is to share information and advice with businesses and departments when they are designing their services so that Canadians may enjoy the benefits of innovation without undue risk to their privacy.

The Government Advisory Directorate provides advice and recommendations to federal public sector institutions in relation to specific programs and initiatives, as well as in the review of PIAs and information sharing agreements submitted by departments and agencies. This group also undertakes various outreach initiatives with the federal public sector in order to encourage compliance with the PA.

The Business Advisory Directorate provides advice to businesses subject to PIPEDA in the context of advisory services for new programs and initiatives, reviews for existing privacy practices and proactive engagements with the business community. This group also undertakes various outreach initiatives with the private sector in order to encourage compliance with PIPEDA.

The Technology Analysis Directorate identifies and analyzes technological trends and developments in electronic platforms and digital media; conducts research to assess the impact of technology on the protection of personal information in the digital world and provides strategic analysis and guidance on complex, varied and sensitive technological issues involving government and commercial systems that store personal information.

The Communications Directorate focuses on providing strategic advice and support for the planning and execution of public education and communications activities. Activities relate to the production and dissemination of information for Canadians and organizations aimed at increasing awareness of privacy rights and obligations through, for example, media monitoring and analysis, public opinion polling, media relations, publications, special events, various outreach campaigns and the OPC web site. The Directorate is also responsible for responding to requests for information from the public and organizations regarding privacy rights and responsibilities through the OPC’s Information Centre.

The Legal Services Directorate reports directly to the Privacy Commissioner. The Directorate provides legal advice in relation to PIPEDA and PA investigations and audits, and in support of other operational activities across the OPC. It represents the OPC in litigation matters before the courts and in negotiations with other parties. The Directorate also includes OPC’s Access to Information and Privacy Program. 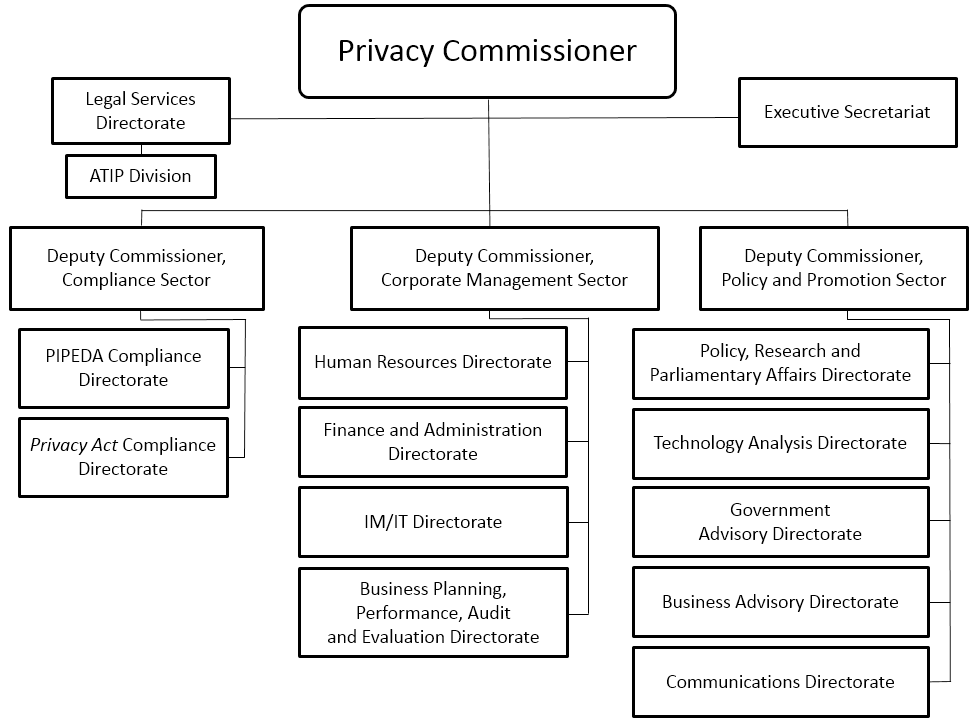 The ATIP Directorate is headed by a Director who is supported by one senior analyst.

In the reporting fiscal year, seven ATIP training sessions were offered to 56 OPC employees, including new employees and those returning from extended leave or temporary assignments elsewhere. The ATIP Directorate also provides trainings sessions as needed. A formal training session exclusively intended for OPC Liaison Officers therefore took place in fall 2017. A manual for Liaison Officers was also developed in order to support them in their role.

In addition, the ATIP Director serves as chair of the Privacy Accountability Working Group. This group comprises representatives from every OPC branch. Its purpose and key activities are to:

In four cases, the OPC was required to claim extensions of time limits. In the four cases, the volume of records that required processing was quite large, and finalizing those requests within the original 30-day timeframe would have unreasonably interfered with the operations of the OPC. With respect to the 22 requests processed in 2017–2018:

Of the 22 requests processed in the reporting year, 8 were for the contents of PA or PIPEDA investigation files. Section 22.1 of the PA prohibits the OPC from releasing information it obtained during the course of its investigations or audits even after the matter and all related proceedings have been concluded. However, the OPC cannot refuse to disclose information it created during the course of an investigation or audit, once they and any related proceedings are completed — and subject to any applicable exemptions. This exemption was applied in 9 cases during the reporting period. With respect to other exemptions, section 26 was invoked in 5 cases and section 27 in one case.

Lastly, the OPC was consulted once, by Statistics Canada, for documents relating to an OPC investigation.

During the reporting period covered in this report, the OPC was the subject of 2 complaints under the Privacy Act. The Privacy Commissioner, Ad Hoc tabled 2 reports of findings during this fiscal year. The two complaints were not deemed to be well founded and therefore no further action was required.

The OPC conducted one privacy impact assessment concerning the collection and retention of information for Expressions of Interest (EOI). EOI allows the OPC to update its list of legal representatives by inviting qualified lawyers and law firms to express their interest in being placed on an eligibility list for possible appointment as legal representative for the OPC.

No work concerning privacy-related policy instruments was undertaken during the fiscal reporting period covered by this report.

The ATIP Director is a member of the OPC’s Policy Development Committee. In that role, policies, directives and guidelines have been and continue to be reviewed to ensure that the PA is respected.

2.5.2 Relevant pages processed and disclosed by size of requests

2.6.1 Reasons for not meeting statutory deadline

2.6.2 Number of days past deadline

5.1 Reasons for extensions and disposition of requests

6.1 Consultations received from other Government of Canada institutions and other organizations

6.2 Recommendations and completion time for consultations received from other Government of Canada institutions

6.3 Recommendations and completion time for consultations received from other organizations