The dawn of public camera surveillance 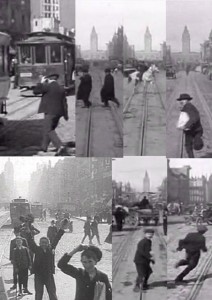 It’s a snapshot from the very first days of public camera surveillance – a streetcar slowly moves down San Francisco’s Market Street sometime in 1905 or 1906*, toting a camera at its very front. Produced by local film makers the Miles Brothers, it appears to offer a relatively unvarnished look at the street life of the time.

Commentary from Library of Congress archivists, who restored the film nearly forty years ago, noted that some of the streetscape was staged:

“… a careful tracking of automobile traffic shows that almost all of the autos seen circle around the camera/cable car many times (one ten times). This traffic was apparently staged by the producer to give Market Street the appearance of a prosperous modern boulevard with many automobiles …”

Nevertheless, the behaviour of the many pedestrians offers some insight into early reaction to the presence of a camera in public. In the opening minutes of the film, the camera does not seem to affect behaviour on the street. Some gentlemen preen and pose as they spot the camera, but most go about their business. There are some expressions of surprise, as even a camera is a novelty for the time. Some seem to be upset that the streetcar, despite the camera, will not stop to pick them up.

The longer the camera travels down the street, though, the more blatant the behaviour change. I’ve clipped a few stills from the film to illustrate these points:

Consider the very different results when a similar film was made in Vancouver, in 1907: the filmmaker spoke to the local newspapers about his plans and actively encouraged citizens to step into the frame. The result?

“… the Vancouver Province reported that “many prominent citizens were suddenly stricken with kinetoscopitis yesterday” and reassured readers that “kinetoscopitis is not nearly as serious in its effects as spinal meningitis.” The article observed that “the way that prominent citizens suddenly discovered that they had business on the other side of the street and strolled across sort of unconcerned like, when they saw the kinetoscope coming was very amusing to those on the front of the car.”

In contrast, public surveillance is very much expected today. Just look at a Google Maps mashup, created yesterday, of the locations from which members of the public filmed the tasing of a Phillies baseball fan chased across the field at Citizens Bank Park – and then posted that footage online.

*see more on the debate about the film’s date at the SFGate blog. Recent research suggests this film was shot just days before the 1906 earthquake – which destroyed much of Market Street.