Appendix A: Example of a promotional e-mail submitted by Compu-Finder

Appendix D: Compliance Agreement Between: The Privacy Commissioner of Canada and 3510395 Canada Inc.

The e-mails sent by Compu-Finder

Collecting e-mail addresses from websites and other sources

Implied consent and exceptions to consent

The relevance of CASL

Compu-Finder's response to our recommendations

Example of a promotional e-mail submitted by Compu-Finder to the CRTC on March 13, 2015
(Note: Image is available in French only. A text version in English is available under the image.) 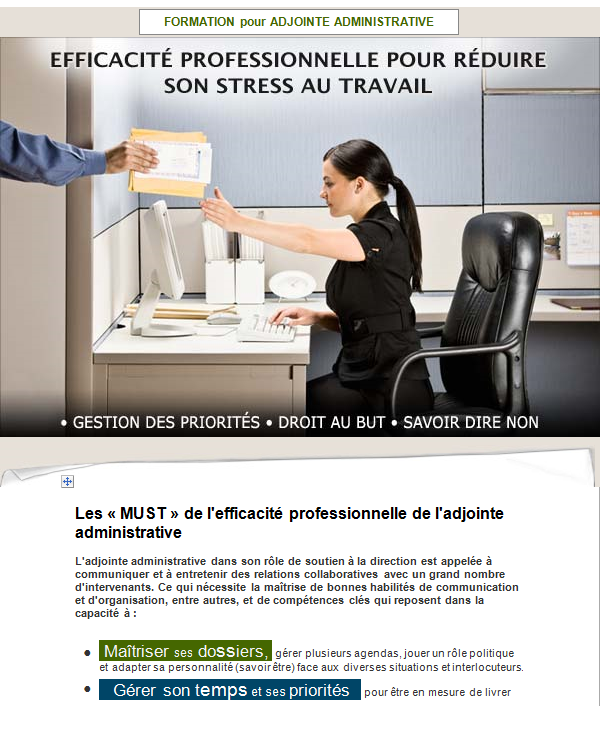 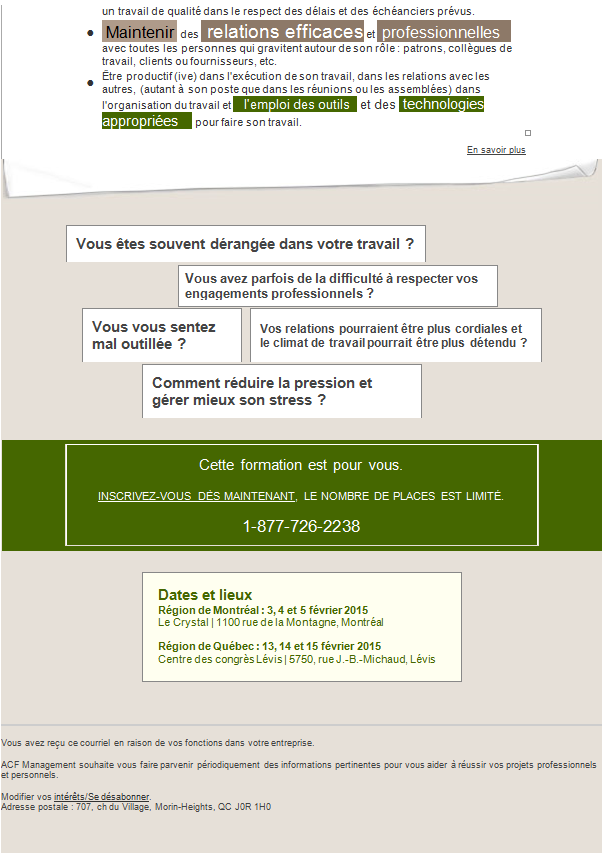 List of email addresses sent to Compu-Finder on April 8, 2015 for which we requested evidence of express consent:

Compliance Agreement Between: The Privacy Commissioner of Canada and 3510395 Canada Inc.

WHEREAS the Privacy Commissioner of Canada ("the Commissioner") is responsible for the administration and enforcement of Part 1 of the Personal Information Protection and Electronic Documents Act (the "Act"), which governs the collection, use or disclosure of personal information by organizations in the course of commercial activities;

AND WHEREAS on July 1, 2014, Canada's Anti-Spam Legislation ("CASL") amended the Act to include provisions specifically targeted at the harvesting of electronic addresses through means of computer programs;

AND WHEREAS 3510395 Canada Inc. ("Compu-Finder") is a federally-incorporated company based in Morin-Heights, Quebec, which offers professional training courses in Ontario and Quebec;

AND WHEREAS Compu-Finder sends e-mails promoting its professional training courses primarily directed to employees in organizations operating in the private, public and not-for-profit sectors in Quebec as well as in other provinces;

AND WHEREAS on November 28, 2014, the Commissioner initiated a complaint against Compu-Finder pursuant to s. 11(2) of the Act, on the basis that there were reasonable grounds to investigate Compu-Finder's collection and use of individuals' e-mail addresses for the purpose of sending e-mails promoting its business activities;

AND WHEREAS the Commissioner, based on his investigation, found that Compu-Finder has contravened several provisions of Division 1 of Part 1 of PIPEDA as follows:

AND WHEREAS the Parties agree that while entering into this Agreement is voluntary, once entered into, it binds the parties to the obligations herein and failure to comply can trigger the application of s. 17.2 of the Act;

NOW THEREFORE, pursuant to ss. 17.1 and 17.2 of the Act, the Commissioner and Compu-Finder hereby agree as follows:

3510395 Canada Inc.
Per: Mme. Sylvie Pagé, President
I have authority to bind the corporation.

For further information about this investigation, please see:

The SRC is managed by the Canadian Radio-television and Telecommunications Commission (CRTC). It gathers information on spam and other electronic threats from various sources to support the enforcement activities of the federal agencies responsible for enforcing compliance with Canada's Anti-Spam Legislation. One important source of information is data received from online public submissions and reports.

An Act to promote the efficiency and adaptability of the Canadian economy by regulating certain activities that discourage reliance on electronic means of carrying out commercial activities, and to amend the Canadian Radio-television and Telecommunications Commission Act, the Competition Act, the Personal Information Protection and Electronic Documents Act and the Telecommunications Act, S.C. 2010, c.23

Memorandum of Understanding for Cooperation coordination and information sharing between the Commissioner of Competition, the Canadian Radio-television and Telecommunications Commission and the Privacy Commissioner of Canada regarding the implementation of their mandates under CASL.

Subsection 17.1(1) of the Act, which came into effect on June 18, 2015, states that if the Commissioner believes on reasonable grounds that an organization has committed, is about to commit or is likely to commit an act or omission that could constitute a contravention of a provision of Division 1 or 1.1 or a failure to follow a recommendation set out in Schedule 1, the Commissioner may enter into a compliance agreement, aimed at ensuring compliance with this Part, with that organization.

See Appendix A of this report for an example of a Compu-Finder promotional e-mail.

See Appendix B for sample e-mail addresses of individuals who sent submissions or reports to the SRC about e-mails received from Compu-Finder between July 1, 2014, and September 10, 2014, yet were not listed in Compu-Finder's database.

See Appendix C for a list of e-mail addresses sent to Compu-Finder on April 8, 2015.

The dates cited in Paragraphs 79 to 87 are the dates that submissions or reports were sent to the SRC by the individuals concerned. The majority were submitted to the SRC on the same day that they received the e-mails from Compu-Finder.

The three additional individuals: [names and e-mail addresses withheld by the OPC] were interviewed between April 30, 2015, and May 1, 2015.

Appendix A: Example of a promotional e-mail submitted by Compu-Finder

Appendix D: Compliance Agreement Between: The Privacy Commissioner of Canada and 3510395 Canada Inc.